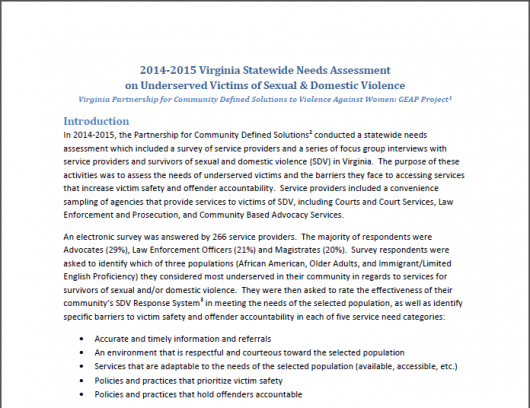 In 2014-2015, the Partnership for Community Defined Solutions2 conducted a statewide needs assessment which included a survey of service providers and a series of focus group interviews with service providers and survivors of sexual and domestic violence (SDV) in Virginia. The purpose of these activities was to assess the needs of underserved victims and the barriers they face to accessing services that increase victim safety and offender accountability.  See the full report for a summary of the project, including findings and next steps.

The Spring/Summer 2015 edition of The Resource shines a spotlight on campus sexual assault. Included in the special campus section are the following articles:

Other topics covered in this issue include: effective social media advocacy, The Six Pillars for Prevention of child sexual abuse, the 2015 National Sexual Assault Conference in Los Angeles, and more.

2015 Virginia General Assembly legislative updates, including a few significant firearms bill vetoes. The bills that passed will become law as of 7/1/15. This Power Point is from a presentation by Susheela Varky to Virginia legal aid attorneys on June 3, 2015.

2016 New Protective Order Law - What does it mean?

On July 1, the new law that prohibits persons subject to protective orders from possessing firearms will take effect. We have designed a brief FAQs sheet about the new law that provides some basic information on what the law does, what it doesn’t do, and outlines conversations/issues that communities need to be talking about to come up with protocols. It also provides a link to some best practices.

DCJS has also put some information up on their site.  This link has information on a recent brochure that DCJS developed on the new law, a list of law enforcement agencies who are willing to accept firearms, and a link to a new grant opportunity to fund pilot sites for implementing the new law.  In short, there is not a statewide directive for implementation.  Local courts, law enforcement, domestic violence programs and other stakeholders have to come together to come up with a plan for their locality.